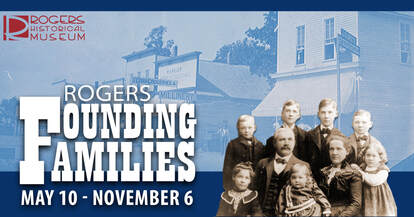 Rogers was officially founded on June 6, 1881. In celebration of the 140th anniversary of our city in 2021, we invite you to come learn more about the families that contributed to the founding of Rogers and its early growth. This exhibit highlights some of the earliest families who settled in this area beginning in the 1830s through the early 20th century. On show at the Hailey Building in the Trammel Gallery.

Get a chance to view early Rogers history like never before. Come explore fun items from Rogers Founding Families including original tools, medicine bottles, doctors instruments, a pocket watch, post cards, a Knights Templar Uniform and even a cork sizer. Learn the fascinating history behind families such as the Millers who, after opening a simple dry goods store in 1881, had family members that went on to become a mayor, city treasurer and workers on the Frisco
Railroad.

​Discover 140 years of Rogers' history as seen through the camera lenses of the people who experienced that history first-hand. This timeline exhibit displays photographs highlighting people, events and places from Rogers' beginning when the first train arrived at the Frisco Depot on May 10, 1881 (the unofficial birthday of Rogers) and ending with images of today. Permanently on show at the Museum's Key Wing in the Kathleen Dickerson Classroom.

The final photograph depicting Rogers in 2021 will be the winner of the 2021 Digital Photo Contest, Rogers Life in 2021. 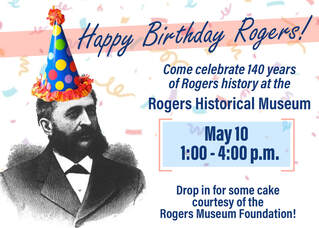 Thousands of spectators came from all around Northwest Arkansas to the Rogers Frisco depot on May 10, 1881 to witness the first train roll into town. Although the City of Rogers was incorporated a month later on June 6, this historical date is traditionally celebrated as the birthday of Rogers. We’ll be celebrating this year’s 140th birthday at the museum on May 10 with the opening of two new exhibits, Rogers Founding Families and Rogers Through the Eye of the Lens. Come by between 1-4 p.m. to enjoy a slice of cake courtesy of the Rogers Museum Foundation.
​