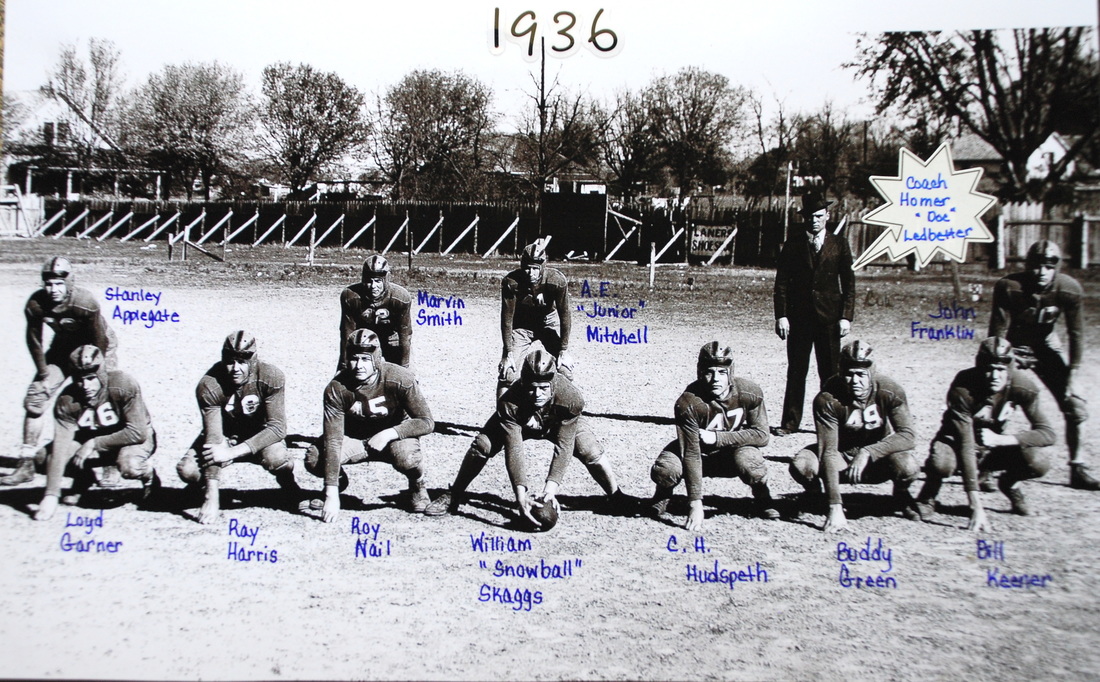 Recently Mitchell and Billie Sue Graham Hankins contacted me about a possible Remembering Rogers story about the 1936 football team. I soon learned that the team was great not only in football but many were also war heroes and outstanding citizens who shaped Rogers after WWII. This appeared to be a very interesting story for I knew that Mitchell was no slouch of an athlete himself, having played for Rogers on the 1964 State Champion team. Mitchell and Billie Sue are on the Rogers Athletic Hall of Fame board of directors and are dedicated to recognizing the achievements of Rogers School athletics and the community pride that goes with that success.
Mitchell and Billie Sue have made the 1936 football team their passion and researched the lives of every player who played on the team. Sometimes this research carried them all over the country while trying to locate information from relatives and sources in different states. They have not only gathered information about the lives of each player, but have compiled data about every game, statistics, and pictures.
The first game of football played in Rogers was against Bentonville in 1896 (no one knows who won). The game was played at the Fairgrounds at First and East Oak, where Christ’s Church is today. The second football field was at Locust and N. Second (the present location of Harp’s Grocery) where Rogers played until 1932. At that time, a new field with no bleachers was built on N. Eighth Street, the present location of the Post Office. It is interesting to note that this field had a six foot drop from one end to the other. In 1978, the Mounties began playing in Gates Stadium where the Heritage War Eagles play today. Mitchell and Billie Sue’s daughter, Michelle, was crown bearer for the first homecoming game in Gates Stadium.
In the early days, Rogers did not have a mascot, the team known only as Rogers High School. In 1935, the school held a contest in which students wrote a theme suggesting different mascots. The winner of the contest was Berniece Price Kincy (Mitchell Hankins Aunt). She named the mascot “The Mountaineers,” and designed the hillbilly character that is still used today.
Until the amazing team of 1936, Rogers was mediocre at sports and had never had an undefeated football team. The school hired Homer “Doc” Ledbetter in 1935 to coach football, basketball, baseball, and boxing. Doc was from Huntsville and played football for Springdale and the University of Arkansas, where he was elected to the All-SWC team for 1931. He played in the NFL for the Staten Island Stapletons in 1932 and the Chicago Cardinals in 1932-33. The great Red Grange who played for the Chicago Bears was asked who was the hardest hitter he ever faced. Grange’s reply was, ‘Ledbetter from Arkansas.’” Doc’s  football career was cut short by a knee injury, so he played minor league baseball from 1935 until 1937 while coaching at Rogers. (Info from Mitchell Hankins)
Doc came to Rogers and immediately made some changes in coaching. Lawrence, Gene, and Ray Harris were all centers for the team. Coach Ledbetter moved Ray Harris to tackle and Snowball Skaggs to center, a move that better fit their talent. He taught the team that blocking and tackling were the most important aspects of football and he stressed these points. He reduced practice from four hours to two hours to keep the boys fresh and to allow the boys time to walk home (some several miles away) before dark to do their chores. The team traveled to away games in cars, a big improvement over the former bus rides. On game day, Doc fed the team their pre-game meal – a poached egg, a piece of unbuttered toast, and hot tea. Another new innovation – Coach Ledbetter’s wife, Bonnie Sampier Ledbetter served as the scout for the team. While Rogers played on Friday night, she was scouting the next week’s opponent. She never saw Rogers play until the last game of the year.  (Info from Ike Skaggs, the son of William “Snowball” Skaggs, who played on the team.)
At the beginning of the season, the team did not have enough shoes for all of the players. Doc made a call for help to his former NFL team, The Chicago Cardinals. The next week, a shipment of shoes arrived from Chicago. The uniforms were tattered and many unusable. With the leadership of Supt. Birch Kirksey, the community responded and raised $275 to buy 15 complete outfits. The list of donors seemed to include virtually every business and organization in Rogers. With the 15 new uniforms and the serviceable old uniforms, the team was outfitted and ready to play. The team picture that year showed the players, some with the old uniforms and some with the new ones.
The 1936 Rogers Mountaineers, Random Notes by Ike Skaggs gives great insight into the team and happenings from his father, Snowball Skaggs. Here are some excerpts:

“The best player on the team was Junior Mitchell. According to Snowball, Junior got pregame jitters pretty bad. The standing rule in the huddle was to “call two plays, call timeout, and let Mitchell throw up.’ Junior Mitchell scored early and often.”

“In Snowball’s opinion, Ray Harris could do it all. It was Dad’s belief that Ray Harris could have played in any era with his size and speed. On short yardage plays, Ray moved back to fullback. ‘We didn’t punt much, and when Ray was carrying the ball, you either blocked for him, got out of the way, or were run over.’”

“When the team played Alma at Alma, they were tied 0-0 at halftime… Doc told the team that the 2nd team would be starting the second half. One of the starters asked him what they were supposed to do. Doc pointed to a knoll next to the stadium and told them to go sit down. The 2nd team beat Alma 24-0. The next week they played Van Buren at Rogers. Junior Mitchell scored on the first play and they beat Van Buren 79-0.”

“The team had an outbreak of boils early in the season. Dr. McNeal came to the school, lanced all of the boils, and they were back in business. Dad said the disinfectant he used hurt worse than the boils.”

“Rogers didn’t play Bentonville when Snowball was in high school. The series was cancelled for a few years because of fights in the stands during the games.”

“A note about the Superintendent, Mr. Kirksey: I have never heard a bad word about him. Dad got into a fight at school, he and whoever he fought with, both got the ‘board of education,’ and that was it. Snowball thought Mr. Kirksey hung the moon.”

So, who were these talented men who came together for that magical undefeated season? The team had 27 players and many served our country heroically during WWII and came home to be outstanding businessmen and leaders. Here are a few as recounted in The 1936 Mountaineer State Championship Team by Mitchell Hankins:

Stanley Applegate – became a medical doctor and practiced in Springdale.

Eddie Bishop – Joined the Army/Air Force and became a jet pilot. Would often buzz Lowell in a T-33 jet trainer dipping the wings to say hello. Retired from the military.

C.H. Hudspeth – Served in the  Army. Owned and operated the Cleo-Vest Bottling Co. in Rogers at 310 S. First Street. Bottled popular soft drinks such as Cleo-Cola, Bubble UP, and C.H.’s Grape.

Paul Belts – Served in the Army. Big time hog producer with many Grand National Champions from his farm in Hiwasse.

William “Snowball” Skaggs – Played college football for the Univ. of New Mexico. He joined the AR National Guard and was accepted into flight training. He flew anti-submarine patrol, was a bomber instructor, and fighter pilot. After the war, he came home to Rogers and worked in sales at various capacities until he retired.

A.E. “Junior” Mitchell – Played football and basketball for the Univ. of Arkansas. Served in the military in WWII as a paratrooper. He owned the Mitchell Lumber Co. at SE corner of E. Walnut and Arkansas Streets.

Ray Harris – Football scholarship to Hendrix College where he was “all-everything” in the conference. He and his brothers, Gene and Lawrence, owned the American National Bank which later became Arvest.

Coach Doc Ledbetter – Coached only two years in Rogers, then accepted job in 1937 at Hobbs New Mexico. Fought in WWII under Gen. George Patton, achieved rank of Lt. Colonel. He received too many awards to mention. Returned to New Mexico and became Director of the New Mexico Highway Patrol. He died in a traffic accident in 1946, was returned home and buried in the Rogers cemetery.

This is a summary of the fantastic exploits of a few men who did great things and made Rogers a great place with a proud heritage. 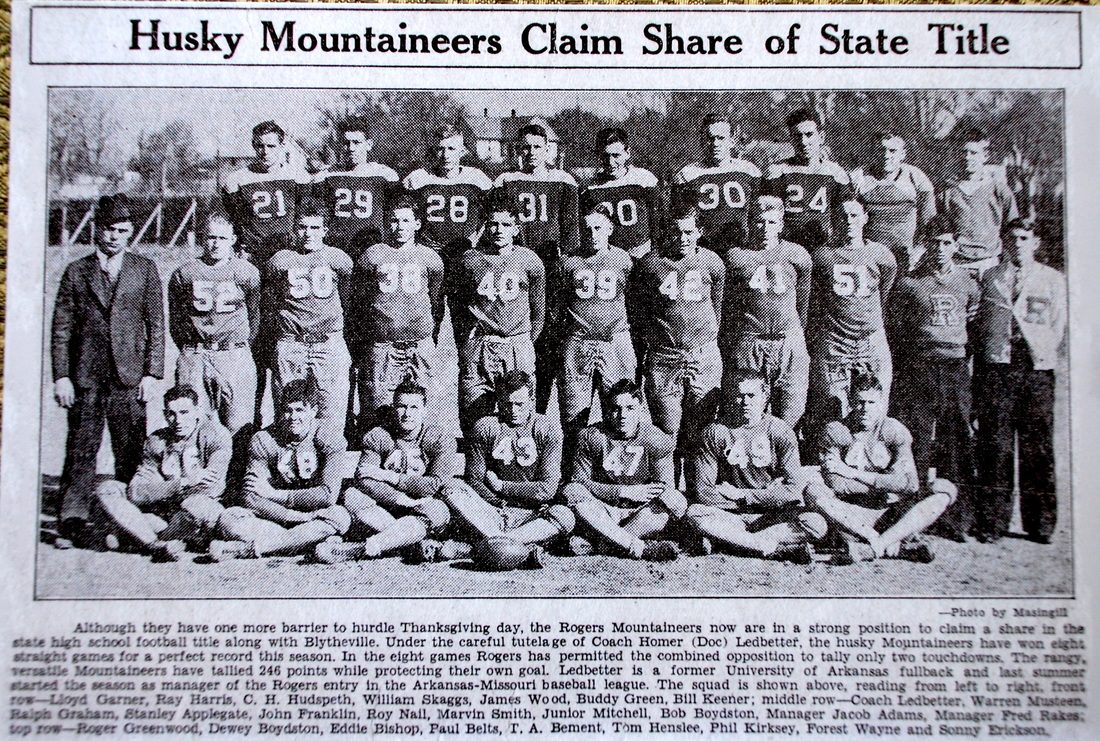