One of the most fascinating true tales in the history of Rogers is the story of the Kruse gold mine. It all started in 1883 in LeSeur, Minnesoto when Henry Kruse met Capt. C.W. Rogers and complained about the harsh winter weather. Captain Rogers, the general manager of the Frisco Railroad and the man the town of Rogers was named for, suggested that the family visit Rogers, Arkansas, just incorporated in 1881. Henry Kruse liked Rogers and in 1883 bought an 80 acre apple farm that included all of the area enclosed between Fifth, Eighth, Oak, and Olrich Streets (This includes all of Heritage High School and the football field).

Henry Kruse had a son, William (Will) H. Kruse, who was raised in Rogers but in 1900 was working in Minnesoto. Will started having visions at the age of 40. He would go into a trance-like state and start writing. He wrote what the Vision told him and wouldn’t know until he came out of the trance what he was writing. At first people thought he was crazy, but he actually predicted some events that were amazingly accurate. Kruse, with his visions, predicted the death of Queen Victoria, the San Francisco earthquake, the assassination of President McKinley, and many other events. Chronic visions revealed that he should look on his father’s farm under “a wild apple tree sapling” to find gold. The visions told Kruse that he would find enough gold to make all of the citizens of Rogers rich and eliminate poverty in the world. Family members could not find the spot, so he traveled to Rogers in August 1902 and found the sapling himself. Digging produced some ore, but assayers said it contained little gold.

Will Kruse’s life was led by his visions and he wrote extensively about them. To share his wisdom with the world, he decided to publish a newspaper, Sunshine and Truth, filled with his visions. Erwin Funk, the publisher of the Rogers Democrat, related the story of selling a printing press to Kruse: “He wanted to buy the printing press and his vision told him to pay $150 for it. So I sold it to him for $150 even though I only wanted $100.” Kruse published over 6,000 copies of Sunshine and Truth.

He returned to Minnesota and continued to have visions. The excitement started for Rogers in 1903 when Kruse sent a telegram from Minnesota to 50 people in Rogers promising “Ten million dollars for all of the people of Rogers.”

The actual digging started on September 15, 1905 with a parade including a band, 30 workers, seven horses and equipment, and many of Rogers’ leading citizens. It started downtown at the L.M. Proctor Mercantile Store (Kruse’s brother-in-law) to the mine site on the Kruse farm. There was great enthusiasm because W.H. Kruse was going to make everyone rich. The digging commenced with round-the-clock armed guards, but little gold was found.

By 1907, smelters, two towers, and an assay officer, were constructed, but still no significant gold. Kruse and his wife and daughter returned to Minnesota, but left his brother-in-law J.P. Huber to run the mine. A train carload of ore was sent to St. Louis. W.H. Kruse would not believe the local assayers who told him the ore was worthless. In St. Louis, the ore was deemed to be dirt, and was dumped beside the tracks. A vision told Kruse that the ore was not tested properly and that it was actually worth $2500 to $5000 a ton.

Will Kruse continued to believe his visions and the mine continued off and on in operation for the next two decades. He always wanted the gold to help mankind and not to enrich himself. He accepted money from family members but refused to sell stock on the open market. One of his most ardent family believers was L.M. Proctor, who invested heavily in the mine and it bankrupted his mercantile business in 1909. Incidentally, L.M. Proctor bounced back and started the Proctor Potato Chip Factory in 1923 at his home at 703 S. Third Street. The company started by Proctor continued to make potato chips and other snacks until 1961.

Until his death, Will Kruse never doubted that immense amounts of gold were in the ground at the mine site. A story in the Rogers Daily Post November 10, 1924 stated: “W.H. Kruse at Minneapolis, Minnesota, had recovered a fabulously rich quantity of gold from a shipment of several pounds of oar from Rogers… Mr. Kruse purchased two commercial sized smelters and shipped them to Rogers.” Kruse came back to Rogers and constructed two new buildings, one with two smelters and a refining plant to refine pure gold. Unfortunately for Kruse and all mankind, he died in 1925, before realizing his dream of untold wealth to aid the unfortunate of the world. The mining effort was abandoned. (Much of this information was provided by the Rogers Historical Museum and Will Kruse’s nephew, Joe Huber)

The Kruse mine is the only gold mine in Benton County and was located between the campus of the Heritage High School and Eighth Street (Hwy. 71B). Today it would be between the Highway Host Motel and the Family Dollar Store. How many folks drive on Eighth Street without realizing that they are passing the only gold mine in Benton County? Was Kruse right? Is there still gold down there? 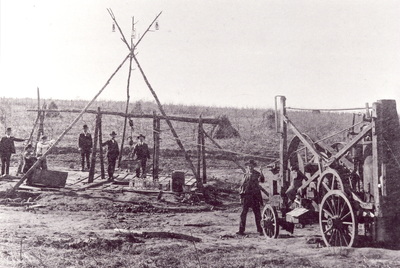 Kruse Gold Mine, 1905 (courtesy of the Rogers Historical Museum) 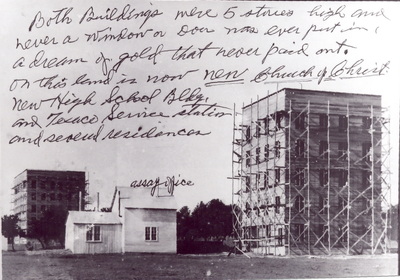 Kruse Gold Mine buildings in 1907 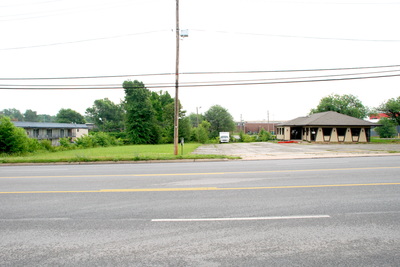 Site today on S. Eighth Street by Heritage High School. (photo by James Hales, 6-4-2016)
If you enjoy these stories and love Rogers, join the Friends of the Rogers Museum and help us preserve our memories and history. For a limited time, if you join the Friends, you will receive a free copy of Stories and Memories of Rogers, Arkansas by James Hales. This is a $12 value plus your membership helps fund our non-profit efforts to preserve Rogers' history. Click here and join the Fun!