The Story of Rogers’ Brick Streets

Rogers originated alongside the railroad in 1881 and immediately its citizens were plagued with the dirt and mud streets. During the rainy season, the streets were a muddy nightmare; during the dry season, the dust choked everyone within sight and left a thick layer of grime on everything downtown. The hogs, chickens and other livestock that roamed the streets added to the suffering.
It is fascinating that during this time of dirt streets ­– from 1881 until 1924 – a period of almost half a century, almost all of the impressive buildings downtown were erected. The poor merchants continuously faced the problem of customers tracking in mud and other unnamed refuse.
The road problem became much worse when automobiles arrived in Rogers. The newfangled contraptions flew down the streets at an amazing speed of 15 mph and threw up a fog of dust much worse than the horses. Many times the autos would drop off in one of the deep potholes and have to be pulled out by horses.
Serious discussions about paving started about 1910. Many options were considered to control the dust and mud with much discussion and disagreement about different kinds of paving and who would pay the cost. Most of the owners with road frontage wanted to pave with macadam, a mixture of crushed stone and coal tar. Other options discussed were paving with brick and even wood blocks with the cost and consequences of each carefully weighed and debated.
Since it was impossible to get all of the property owners to agree, it was suggested in 1912 to only pave in front of the businesses that were willing to pay, however this would result in the streets resembling a checkerboard with some parts paved and some dirt.
Finally, in 1912, a local newspaper proclaimed in large letters, "Paving Certain." The city council created a paving commission of prominent businessmen consisting of George D. Parks, E.W. Homan, Lee M. Harris, E.J. Robinson, E.C. Lone and J.A.C. Blackburn. Even Coin Harvey enthusiastically supported the paving. With these giants of local businesses leading the effort, paving was certain, right? Well, not exactly, as the problem – mainly who would pay the cost – went on for another 12 years.
Even though there were still disagreements over the assessments to pay for the project, on May 7, 1924, the contract to pave the streets was awarded to KAW Paving Co. of Topeka, Kansas. The paving commissioners leading the effort were J.E. Applegate, Ed Lone and Charles Juhre. The contract called for paving with three-inch brick laid on a five-inch concrete base with an inch of sand beneath the bricks. After the bricks were laid, they were to be covered with an asphalt preparation to fill the cracks. The estimated cost of paving 24,000 square yards was $100,000, and according to a 1925 newspaper, it was the first paving done in Benton County.
The work crews consisted of about 100 men with one gang of about 30 men leveling and grading the dirt for the concrete. The concrete crew was close behind and poured and finished the concrete base. The concrete was prepared in a nearby mixer and hauled to the site in four small trucks and wheelbarrows. The bricklaying crew began laying bricks as soon as the concrete was hard enough to support them. John Mylar was 12 years old and worked on the construction. He related his memories in a story in the Morning News, June 12, 1988 by Flip Putthoff: “One man layed the brick. I don’t know his name but he was a Swede from Topeka. The bricklayer had about six men working on each side of him bringing him the brick and he could really lay ‘em, as much as a half a block per day.” Myler’s job was to bring water to the workers. “I was about 12 years old and got 15 cents an hour and all the water I could drink.”
Many folks in Rogers claim that their ancestors worked on the construction, and this is probably true. The hot grueling work paid 25 cents per hour and many workers did not last more than a day; so hiring new labor was a constant necessity.
The bricklayer/artist laid the brick in rows except where the streets intersected. Here he wove the bricks from the intersecting streets together in an intricate basket-weave pattern to make a perfect junction. The job was completed by December 1924.
Our leaders in 1924 hoped that the brick streets would last for 10 years, but 91years later, we are still enjoying our quaint historic streets in downtown Rogers. 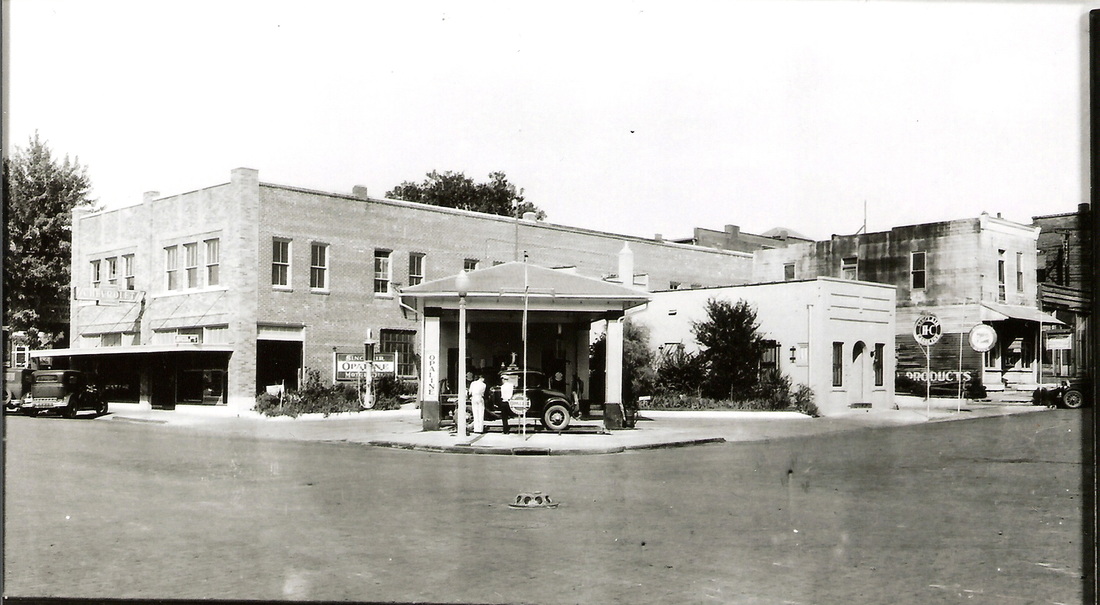 This picture from about 1930 of the intersection of Second and Elm Streets shows a new street light innovation that was installed when the streets were paved in 1924. In the center of the street, there was an electrically lit caution lite that was designed to stick up above the pavement and be driven over.