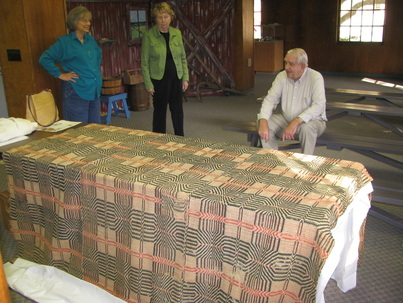 (From left to right) Monte Harris, Marie Putman, and Jerry Putman examine the coverlet woven by Marinda Patterson Putman. Marinda was born in 1827 and died in 1863.
During these times of economic and political uncertainties, a person might find comfort in knowing that today is not the first time Americans have had to face challenging situations. By knowing our past, we are afforded the luxury of having a valuable point of reference. Otherwise, how can we know we are moving forward as opposed to simply spinning around in circles?

For example, we can look back to the days before the Civil War for valuable information, not because we expect another Civil War, but because the people back then were dealing with many of the same problems we have today. What solutions were good for the people in the old days?  Which ones, if any, might work for us today?

In 1836 the state of Arkansas sponsored the Real Estate Bank to the tune of $2 million dollars. The endeavor was steeped in mismanagement and corruption which produced piles of worthless bank notes. Finally, the State of Arkansas took control of the bank and began the financial clean-up. Back in those days,  a family’s wealth was not based entirely on cash or paper money. Most families relied on the barter system, which, for instance, might have been trading a wagon load of corn or oats, for any commodity of equal value. Most trading and price setting was between local merchants or neighbors. During that time of economic upheaval, some northwest Arkansas families profited from the crash of the bank system  by acquiring large plots of land through real estate investments but many more families simply survived the economic storm because they owned  productive farms that were paid for and debt free.

Because of their ability to produce most of life’s necessities at home, many people in Benton County were able to survive the hard times and invest their time and energy into building better homes and improving their farms. By the 1860’s, their sweat-equity investments began paying off with barns filled with sweet hay, wheat, and oats which provided forage for healthy mules, horses, cows, sheep and pigs. The corn cribs were bulging and the fruit trees were loaded with apples and peaches. There was a network of wagon roads connecting communities with the busy mills and general stores which offered a surprising assortment of goods, including European imports and luxurious items, as well as fine clothes and accessories from the East Coast. The retail merchants sold goods for cash or traded for any product they wanted to add to their inventories.

It was during this time of abundance, the ladies of northwest Arkansas could spend more time and energy decorating their homes. Just as today, there were books and subscription magazines filled with ideas and creative projects for the lady of the house. There were also stylish dress ideas and coverlet weaving patterns available from grandmothers and neighbor ladies that could be exchanged during sewing circles and church club meetings. The ladies in the old days regularly visited and shared helpful time-saving tips just like ladies of today.

Many Pea Ridge ladies spent hours spinning wool and cotton into thread. They would then dye the threads and use a loom to weave a coverlet. Today, we are fortunate to have several old coverlets made by Benton County ladies whose lovely designs reveal the intricate work done by careful hands and a patient heart. Certainly, the ladies, from the old days, would agree that a plain cover on a bed provided warmth but a beautifully designed coverlet warmed the heart as well.

Coverlets are used in much the same way as quilts.  But coverlets are meticulously woven on a loom thread by thread while quilts are made by sewing pieces of fabric together to form graphic art designs. Many of the families brought their weaving looms with them when they moved to northwest Arkansas. However, looms could be purchased from Sager-Greene general store or from a loom manufacturer in Fayetteville. But better yet, if the man of the house was so inclined, he could make a loom just as Mr. James P. Putman did for his wife, Marinda, who made one of the most beautiful of the surviving old Benton County coverlets.

Marinda Patterson Putman married James Pervine Putman in 1845. They moved to northwest Arkansas around 1853, and purchased property north of Sugar Creek and later, in 1861, purchased 367 acres south east of Bentonville near Droke Creek. During the Civil War, James Pervine Putman served in the 13th General Assembly of Arkansas House of Representatives.

It is not known exactly what year Marinda made her beautiful coverlet but her work shows she was a master weaver. According to family sources, Marinda processed and dyed the wool thread for her coverlet but purchased the cotton thread at the store. She wove the cotton and wool threads together on her loom to create the beautiful coverlet. Sometime during the Civil War, the Putman family was forced to evacuate their home and seek safety. The coverlet was among the few items that Marinda chose to take with her. That event must have happened close to the time of the battle of Pea Ridge since Marinda died in 1863 and is buried in the Putman Family Cemetery. When she died, her coverlet was passed down to the next generation and has been lovingly cared for ever since by the Putman family descendants.

Like other irreplaceable historical artifacts, the old coverlets help us better understand the everyday lives of families, who lived through the best of times and the worst of times. Many of those people lost their homes and their livelihood and were forced to spend years rebuilding their lives. Their stories add interesting details to history much like pieces in a puzzle.

Fortunately, today, with all the great electronic libraries and databases at our fingertips, we have access to far greater pools of information than ever before. Because of the incredible miracles of the electronic age, we can, individually, and at our convenience, explore the vast regions of the past.  Each of us can play a role in preserving our history. Each of us can place our piece of history in the big puzzle of the past.
Sources: