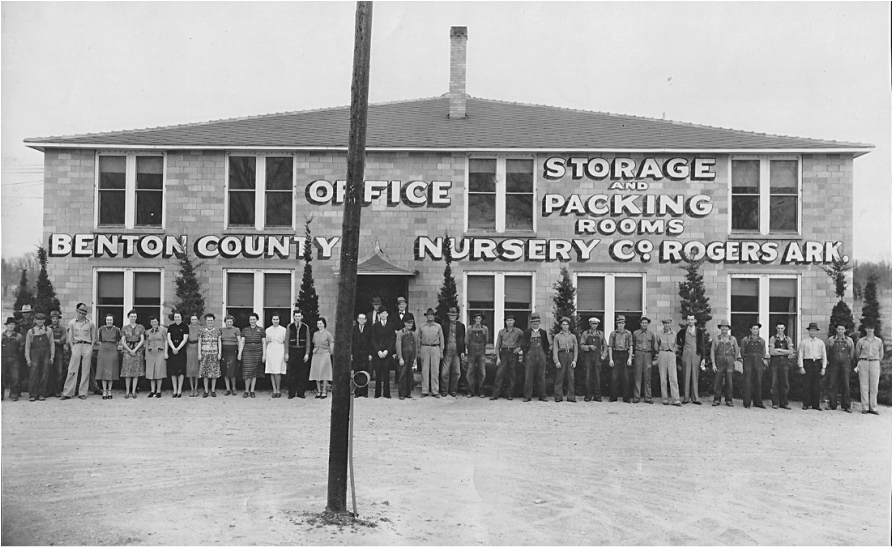 Benton County Nursery about 1945 on Highway 71 South just north of the former Daisy Manufacturing Plant. The yearly company catalogs included a picture of this building with the current office and packing employees. The second lady from the left is Margaret Puckett. (Photo courtesy of Ann Nickell)


Thomas Lee Jacobs started the Benton County Nursery in the back bedroom of his home at 1204 S. Fourth Street in 1915. The business prospered and Jacobs soon moved the office above an old barn that he used for a packing shed. He operated his business in this building  at the corner of S. Fifth and Mulberry Streets for ten years. Margaret Puckett lived down the street and wrote in her scrapbook, “I remember stopping there when I was in grade school and watch the office ladies type. How I wished that I could learn to do that when I grew up.”  Later, after graduating from Rogers High School, Margaret went to work for the nursery and worked there for 13 years. Warren Puckett, Margaret’s brother, also worked at the nursery for many years. (Information courtesy of Ann Nickell, daughter of Margaret Puckett Nickell)
In 1925, Jacobs acquired a tract of land on Highway 71 S. just north of the former Daisy Manufacturing Plant and built a concrete block building to house the nursery. In 1935, he expanded again and built a big two-story brick building for the office and packing house between Highway 71 and the railroad tracks. The business was heralded as one of the showplaces of Northwest Arkansas. Carolyn Duty Banks described the nursery on a Rogers’ website, “It had a gorgeous botanical garden of Oriental design on the north side. As a small child I loved it when my parents took me to visit the garden.”
The company thrived and during World War II, when food was being rationed nationwide, the government encouraged home gardens and fruit orchards. Benton County Nursery aided this effort by offering a Victory seed collection which included a large variety of vegetable seeds for 65¢ and a fruit orchard kit with enough trees for one acre, over 1000 plants, for $60.
The company appealed to “regular” folks and described themselves in their catalogs and literature: Who we are . . . We are a bunch of old fashioned, hard working blue-eyed hill-billies, who grew up right here in these Ozark Mountains, on the farm, and made our living from what we could grow out of this mountain soil and all we know is to treat you exactly like we would want you to treat us if we were in your place and you were in ours.
Benton County Nursery guaranteed their plants to live and offered an installment plan of 50% down and the balance in three monthly payments. The catalogs quoted, “This enables you to have the stock coming on while you are paying out the balance due.”
By 1950, the nursery owned and operated 300 acres and employed about 100 people during the shipping season. The nursery mailed thousands of mail order catalogs to “practically every locale on this earth,” offering a large variety of vegetables but specializing in vines, shrubs, roses, and trees. Over 99% of the company’s mail order business was from out-of-town making the company the largest customer of the Rogers’ Post Office. Shipping charges were included in the price and in one year alone, 1949, the nursery paid $16,000 to ship plants all over the country. (Rogers Historical Museum web site)
The business was always a family owned business while T.L. Jacobs was living. A 1943 company booklet described the nursery family: T.L. Jacobs, President; Mrs. T.L. Jacobs, Vice-President; Verna Jacobs Rhoads, Secretary; George W. Eoff, Landscape Gardener; Lee Jacobs, 2nd Vice-President; Russell Driver, Mgr., Seed and Plant Dept.; Maxine Jacobs Driver, Advertising Manager.
After T. L. Jacobs died in 1960, the company incorporated with manager L.L. Lincoln, Verna J. Herndon, and Mary J. Finley as principal stockholders. In 1961, the nursery announced plans to build a new $50,000 sales center at their location on Hwy 71 South. They were also working with the University of Arkansas in the development of specialty trees, such as fruit trees that produced five different varieties on one tree, a single vine that produced a variety of grapes and a peach tree that produced the world’s largest peach. (Rogers Daily News, 4-5-1961)
No one knows why the company declined in the early 1960s, but the company filed for bankruptcy on May 3, 1963, ending 48 years of service to the nation. It is gratifying to think of the many fruit trees, shrubs, flowers, and assorted plants that continued to produce food and pleasure around the nation for decades after the company closed. 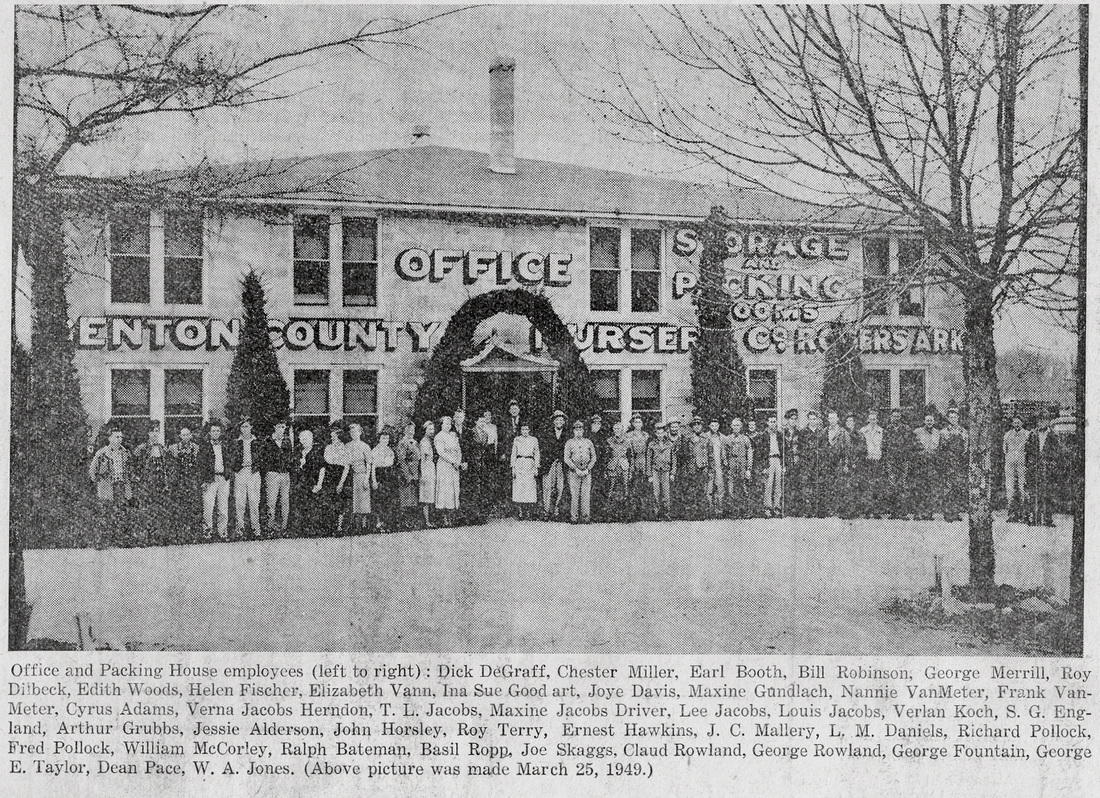 Benton County Nursery from a 1949 catalog. The yearly company catalogs included a picture of this building with the current office and packing employees. You may recognize some of your family or friends in the picture.

Picture from the 1949 Nursery catalog. The road is Highway 71 S. and Daisy Mfg. was later built just to the right of the main building.